Nobel Peace Prize winner Barack Obama did not pronounce the word «human rights» correctly in Beijing. But I'm not disappointed. That's exactly what I expected.

(PS. This article is machine-translated from Norwegian)

Tsering Woeser is a poet and essayist from Lhasa in Tibet. In 2003 she wrote the book Notes on Tibet, which was banned by the Chinese government. Read her webpage: http://woeser.middle-way.net

On November 17, for many people all over the world, the most important news was US President Obama's arrival in Beijing. The international focus rested upon his sunny smile, upon him and the deadpan Chinese head of state, Hu Jintao, speaking to the globe's most important media; it also rested upon him finally mentioning that "all men and women possess certain fundamental rights, […] which are universal rights and all people, ethnic and religious minority groups should be able to obtain these fundamental rights." Yes, he even mentioned the Dalai Lama, who, as Zhu Weiqun, an official from the United Front Department of the Party Central Committee, recently said, "always makes China unhappy." The day before, when he spoke to a carefully selected and trained group of Chinese male and female youths, he also mentioned freedom of speech saying that «freedom of speech, freedom of belief, freedom of information and freedom of political participation are everybody's rights. »

But at the exact same time, on this extremely cold winter's day, there were a few minority people, whose voices are not heard and who do not possess the power to change things, who had to find out in a state of shock about what happened to two young Tibetan writers, Kunchok Tsephel and Kunga Tsangyang. Because of their opinion and speech, they were sentenced harshly on Tibetan soil which is tightly controlled, and hence lost all those "fundamental rights, which all men and women possess."

There are a few foreign journalists who have asked me questions like «what did you make of Obama's visit to China? Did he fulfill your expectations? » In my answer I always had to admit that I had already prepared myself. From Hilary Clinton's China visit last year when she avoided any questions concerning human rights up to Obama's arrival in China now, although they claim that the subject of human rights has been of some concern, President Obama in his natural and unaffected demeanor, like a star coming on stage, still seemed to place too little emphasis on them. Thus, although I would not say that I am greatly disappointed about this, I am able even to view all this with a certain degree of indifference because I have expected the situation to be like this. Yet, I did feel moved when, facing the head of state of the world's greatest totalitarian system, President Obama still said that "all men and women possess certain fundamental rights." But I did not understand why he was not able to clearly state what those "certain fundamental rights" really are. Is the term «human rights» that difficult to pronounce? Perhaps President Obama is more poetically inclined and needs to make use of embellished and indirect language to refer to human rights, so if he bluntly spoke out the two words, it would probably sound a bit crude.

Kunchok Tsephel and Kunga Tsayang are two well-known authors who publish in Tibetan. During last year's Tibet incident », they themselves witnessed how their fellow countrymen of their hometown determinedly took to the streets and voiced their opposition. The two writers revealed their aspirations and discussed facts on the internet, which then unexpectedly became the reason for them becoming criminals accused of jeopardizing «state security» and revealing «state secrets». In other words, one could say that the country's action of using its power to suppress the violent behavior of the opposing masses belongs to the category of secret which is often practiced but never spoken of. Whoever dares to reveal the secret, he or she will become the country's enemy and be confronted with harsh and merciless punishment.

There is an increasing amount of suppression; this is the reality in Tibet. But to be honest, it is already very difficult for us to believe that those important world leaders, who are unable to speak the two words "human rights", will maintain a firm humanitarian stand. 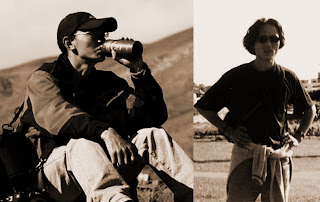 The Tibetan writer Kunchok Tsephel (R) was sentenced to 15 years imprisonment on November 12 by the local government; Kunga Tsayang (L) was arrested on March 17 this year and was recently sentenced to 5 years of imprisonment.

Read the column in Chinese:

Send your comments to: debatt@nytid.no

Give an answer Cancel reply

This site uses Akismet to reduce spam. Learn about how your comment data is processed.

To mobilize against today's totalitarian states, neoliberal ideologues and oligarchs

Europe as a green superpower?

The pandemic and its societal implications

Disappointed with the French intellectual milieu

A life in transit

Ecology as a new form of survival art

911 The power of 20 years of propaganda
911 NYC EPICENTERS 911-> 2021½ (by Spike Lee)
DEATH: An excommunication of the dead and death?
PHOTO: What I'm talking about when I talk about pictures
RACE THEORY: African American Political Thought; A Collected History,… (by Melvin L. Rogers,…)
ANARCHISM: William S. Burroughs. From cut-ups to shotgun paintings (by Lars Movin)
DOCUMENTARY: SEVEN (by Dylan Avery)
ENVIRONMENT: The politics of hope (by Bjarke Møller)
GREEN POLICY: "A kind of solidarity anarchism will constitute a marked showdown with the parliamentary fixation to which the left has been subject for far too long."
COVID-19: Everything Must Change! The World After Covid-19 (by Renata Avila and Srećko Horvat)
ECO MOVIES: Žal Žen (Grief / Sorg) (by Andrea Culková)
INNOVATION: ON THE BASIS OF KNOWLEDGE: The possibilities of the Citizens' Assembly
- Advertisement -

You may also likeRelated
Recommended