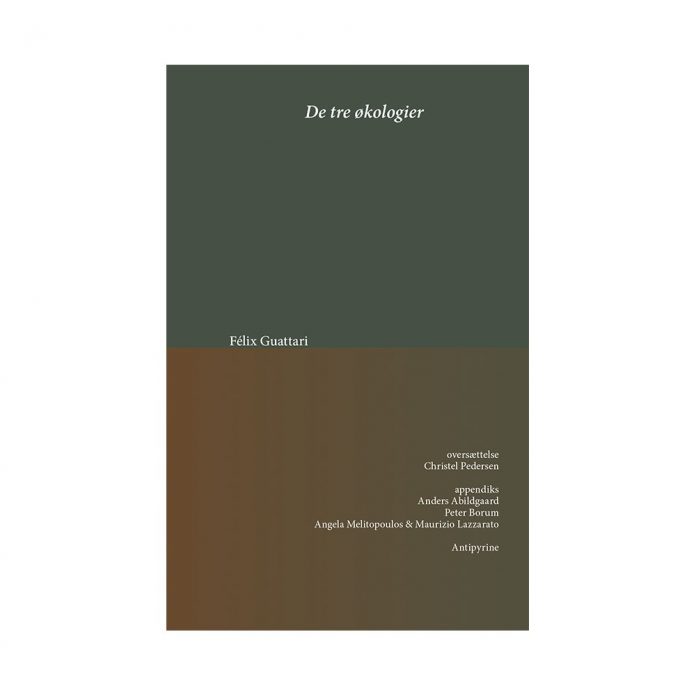 These days, the Amazon jungle is bleeding like never before. Forest fire in a number it has not seen before ravages a gigantic area. Brazilian President Bolsonaro claims that burning is inflicted by Native Americans or peasants or sympathizers trying to put his politics in a bad light. A president who has made the expansion of cattle breeding and meat production an agricultural policy issue!

For the French philosopher and psychiatrist Félix Guattari (1930-92), such would simply be an expression of the last convulsions of the Enlightenment. For when it bleeds in the Amazon, it is because it bleeds into the human mind, a mental life captured by abstract notions of man over the animal and nature. This is culture as opposed to nature, industrial mechanics put above all living life's own capacity to form connections (machine dynamics) – a mental meltdown that makes it impossible to escape the totalization of capitalism.

We must be different from ourselves, says this utopia.

Bolsonaro's policy based on the Bible, beef and bullet (God, meat and military) is a policy that has not only turned every biotope into a capitalist profit, but also dissolved every social resistance and change in a hierarchical order – with a monopoly of violence. The current Brazil is similar to Guattari's worst nightmare. He himself traveled there during the first half of the 1980s, and at that time saw the place as an exciting laboratory for social experiments. The book The Three Ecologies (original 1989) is partly inspired by these journeys and his earlier philosophical exchange with his French colleague Gilles Deleuze.

With Brazil's current policy, however, it becomes clear what is fundamentally wrong with capitalism as it has evolved. And maybe also how we move forward.

Ecology of the mind

Sustainability is subject to the structural violence of increased production affecting all links in the chain. According to Guattari, we do not advance until we stop and understand the mind's own ecology. Subjectivity has, in the name of capitalism, become a homogeneous machine that produces nothing but a competitive subject: I shop and am therefore a contractor; I look for jobs by making myself attractive wherever I go; I buy organic food and realize myself etc.

Subjectivity has gone into self-oscillation. Everywhere there are new opportunities with the web and technology, yet capitalism threatens our time with standardization and unification. And thus it threatens not only the biological world, but also what he calls the existential territories. Existence is not first a defect, but a constant formation of our meaningful practices that do not depend on the subject, but on the repetition (chants) that make connections between me and the outside world. It can be through cooking, chess games in the park, bird mating dance or enriching conversations with a random passer-by. Which can do something to us. For example, citizen salaries and non-consumption-oriented valuations spring from the ecology of the mind.

Change does not begin with the individual, but with the collective. The path does not go from the individual subject to the contexts in which it forms, but vice versa. What sets something new in motion is what happens between the individuals, what runs across. It is not my desire fulfilled by the mobile phone. Rather, it is the beginning of a potential activation of a shared dynamic that can bring about change. It has nothing to do with my needs or with me. The ecology of the mind is an anti-liberal program that breaks with the Western self-understanding that we desire to affirm our individuality and identity.

I shop and am therefore a contractor; I look for jobs by making myself attractive everywhere.

The problem of ecology and sustainability, according to Guattari, is not a matter of protecting nature and stopping pollution, but of inventing new forms, getting things and surroundings to communicate to us in new ways. We have to become different from ourselves, this utopia sounds – that is, find new ways to exist that make sense, we must "restore the Amazon's lung and cause the Sahara to flourish," creating new living plant and animal species. Or we must link the agricultural desire to permaculture and forestry as existential territories, as Peter Borum writes in his post.

Guattari in particular became known and notorious for his anarchist micropolitics in the 1970s, when he experimented with alternative psychiatry at the La Borde clinic outside Paris. Here he served himself with theater pieces and alternative conversation therapy forms.

More interesting is that Guattari's mental revolution promotes an animism as Maurice Lazzarato and Angela Melitopoulos describe in their printed article Maskinel animism. Animism is not just the peaceful setting of things, but an active way of communicating things through us. Through archaic thinking and ancient Indians, Guattari learned that a subject is the most common in the world. "The soul is the core of the real, but it is not an intangible soul in opposition or as a contradiction to matter. On the contrary, matter is permeated by the soul. ”For the Native American, spirits populate the things, the trees and the landscape with stories.

Before we are subjects, we are permeated with soul, that is, the stories and layers of matter, which are not finished with themselves. Animism is not an idealistic anthropologization, but an expressionism in which the smallest particles, things, substances communicate by expressing themselves in marvelous ways. Messages go directly to us via bodies, gestures, noise and pictures.

We fantasize about natural peoples, natural environments and the preservation of nature, but what we need is to open our eyes to the fact that nature is a way of looking at other stories. One can easily read The Three Ecologies as yet another utopian quest for intense life, but one can also read it as a contribution to a Western world in spiritual crisis.

The memories of an anarchist

Healing in the natural