Are you a subscriber and miss MODERN TIMES? Contact our distributor Helt Home at service center @helthjem.no then they will help you. If you have any other questions regarding subscription or distribution, contact us E-mail: abo@nytid.no. You can also send sms to 45020044 (the phone is unattended, preferably use e-mail). You can also buy MODERN TIMES at around 100 outlets throughout Norway. Also follow us on social media: Facebook, Twitter og Instagram.

Click here for Subscription or log in at the top if you have. Our international book review / commentary comes quarterly, as well as weekly as well as continuously Online Newspaper (the archive has around 10.000 online articles). You also get a fixed theme supplement and the magazine Modern Times Review (international documentary) several times a year. 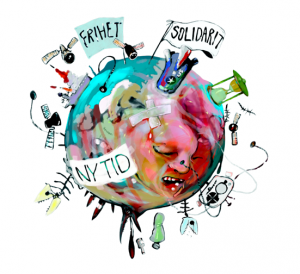 MODERN TIMES has a socially liberal and eco-anarchist value base: MODERN TIMES is on the one hand critical of today's military-industrial complex and the growing control society (big tech, capital / finance and surveillance). On the other hand, we have an ecological-philosophical perspective. A basis in «techne» and «oikos».

CHRONICLE and ESSAY: Debate is referred to social media: Just link via Facebook etc from our articles. Chronicles and essays submitted are a maximum of 800 or 1500 words, respectively. Normally this is not remunerated. Sent this spring editorial staff. We reserve the right to reduce the text length for space reasons. We ask for your understanding that it may take some time to get answers to unordered texts.

MODERN TIMES receives funding from the Norwegian Cultural Council. MODERN TIMES works according to the Editor's Poster and the Beware poster's rules for good press practice. Anyone who thinks they have been wrongfully mentioned is asked to contact the editors.

The board of Ny Tid & Orientering AS:

The presentation by the editorial board.

The newspaper has been published since 19. February 1953, that time under the name Orientering. The newspaper was first published every 14 days, and eventually once a week. A role model we still hold high, from the time Sigurd Evensmo, Kjell Cordtsen and others were editors.

From August 1975 the newspaper changed its name to MODERN TIMES, with Audgunn Oltedal as the first editor, and it was a result of the party gathering on the left and the establishment of The Socialist Left Party (SV) the same year.

The newspaper was released from the party in 1998 and completely independent also in terms of ownership from 2006. Because MODERN TIMES is a continuation of the ceased Orientering, it says “in which Orientering»In the colophon. MODERN TIMES took Orienterings role as the left movement's voice in Norwegian politics. From the beginning was Orienterings style collective and spartan, but eventually the editors presented the articles signed. The newspaper developed an independent style, partly liberated from the party, and increased its circulation to between 17 and 000 in the period 19–000. Norwegian security policy was still a topic in the newspaper after the reorganization in 1973, and the highlight was enough List case, which led to police seizure and trial. From the beginning of the 1980s began the secession from the party, and in 1986 came Find Gustavsen back as editor in competition with Erik Solheim.

In 1998, MODERN TIMES formally released from the party. In July 2005 took over Dag Herbjørnsrud as editor-in-chief. With a new owner and greater financial resources became MODERN TIMES relaunched as a weekly news magazine with Newsweek as an example.

In January 2015 took over Truls Lie as editor, general manager and co-owner (former editor of Morgenbladet and Le Monde diplomatique). The newspaper's line should have a vision of being an independent, pragmatic-anarchist-focused newspaper with a focus on peace & conflict, surveillance & control, as well as ecology & philosophy. From March 2015 became MODERN TIMES relaunched in classic full format as the only one in Norway. From July 2015, the newspaper was reorganized monthly newspaper, focusing on international political and reflected books (prose), documentary photos, documentaries and chronicles. The newspaper was also attached monthly Klassekampen, in addition to its own subscribers and single sales – and was converted to Klassekampen's tabloid format.

From spring 2017 is the international documentary film magazine Modern Times Review attached to MODERN TIMES's subscribers several times a year. The distribution agreement with Klassekampen was terminated from October 2017. MODERN TIMES returned to tabloid format in the spring of 2019 after a period of full format. The online edition and e-newspapers currently contain about 10.000 articles. We also publish the most interesting historical articles from Orientering 50 years ago (1953-1975).

Also look at more Wikipedia . From the summer of 2020, MODERN TIMES was changed to a quarterly edition (commentary / book review) and an ongoing online online newspaper. MODERN TIMES follows the times, where more and more people read articles online, as well as the need to read longer articles and essays on paper.

MODERN TIMES now also has a fixed theme attachment ORIENTERING, as our predecessor (from 1953-75) was called.