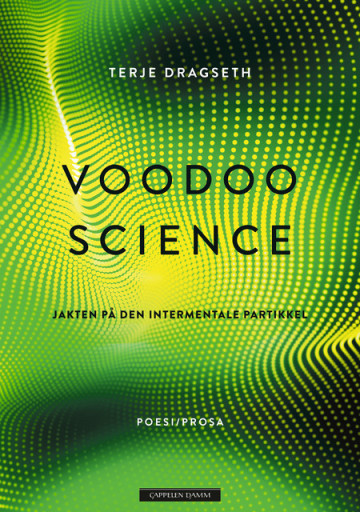 Review written by Ole Sverre Olsen
Facebook
Telegram
Twitter
WhatsApp
Email
Print
8. December 2022
Voodoo Science: The Quest for the Intermental Particle
Forfatter: Terje Dragseth
Forlag: Cappelen Damm (Norge)
POEM / The reader of this book is cautioned against reading too large parts consecutively. You then run the risk of a wild language machine starting up in your head, so that you start writing books yourself.

In the preface to the book Voodoo Science Terje Dragseth writes the following: "It is up to the reader to extract meaning or another existential experience from this book." In the book's back text, it is further stated that this form of literature is, quote: "unlike everything else that is published in Norway." Also, who the author of this work is, presents a mystery. Is it Terje Dragseth himself, or is it an unknown person named Pip?

It almost goes without saying that trying to say something sensible about this work, which in many ways seems to transcend reason, is a risky undertaking. The book has been created as a result of an explosion in a waste bunker, which has then spread completely into literature, it is further stated in the aforementioned foreword. It is therefore tempting to highlight a third 'possibility' when it comes to the origin of this work. Could it be the prevailing forces of nature themselves that have created it, in the same way that a big bang is said to have created the visible world?

The book is to be considered a 7-course dinner served at a slow-food restaurant.

We have hereby taken up the not entirely harmless hunt for the intermental particle. Thoughts inevitably go in the direction of CERN, the world's largest machine, located approximately 100 meters below ground level in Switzerland, with branches further out into several surrounding countries. As is well known, there is also a hunt for a particle, which has arisen in a big bang – The Big BANG. To the extent that Niels Bohr had anything to do with CERN, he is quoted with a scream at the beginning of the book: "No, no, you're not thinking, you're just being logical." Niels Bohr was also one of the co-founders of the giant CERN machine and received the Nobel Prize in Physics in 1922. The engineers at the Cern complex are known for wanting to open portals into other dimensions of reality. Perhaps this is precisely the author of the multifaceted book Voodoo Science desires, with poetry as a gate opener. Distant robot voices from the future are also heard in the book, which I will leave here only to the reader's pleasure or shock.

Like most of the remains from blown-up waste bunkers, this book spans a range of content that stretches from the low to the high, and as is known: In the catchment area of ​​detonated waste bunkers, gold can sometimes be found. The greatest justice that can be done to a work of poetry like this, where even the possible author (Terje Dragseth) seems to disclaim any responsibility for a possible meaning of the book, is presumably to quote from it.

Here are some examples from the beginning, middle and end respectively Voodoo Science, which alternates between the poem format and prose throughout. First the poem "Night sister».

Simon, 1951–2021
Bread-eating sister
Glides glowingly through the grass
And earth-colored eggs
Lying in regret in the garden
And little birds wake up one by one
And outside the garden stands a pale night child
The daughter of the herbalist
In a beautiful dress and has tamed a squirrel
And over the spruce forest water, dad flies
With a loop around the neck
Sleeping pills are hidden in the jaws of the simple-minded brothers
Heartfelt sister captured by God
The walls around her house scarred by stone throwing
The cashier at the gate sells roasted almonds
The elk stands tall in the grey-sour mist over the moor
My cry trembles and I regret something I don't remember
Light a smokeless fire in the spruce forest
The hands over the flames are laughing
And she who rings with fox bells – it's for my dead sister
She was also a pale night child
Above the river, the frost smoke drifts like a river above the river
I'm chilled by dead mother
I am not the first born
Waiting at the bank, shiny as aluminium
And lives to meet the moon at cockfight
I have a wife who has caught eagles
She has understood the awakening to God

In this mythical poem, one can trace a certain literary kinship with both Ellen Einan, Ben Okri (The Hungry Road) and I would almost also dare to say George Trakl. But this extract is only the opening stanzas of a longer poem of ten pages. I would advise readers to take in the whole poem in a coherent manner in order to penetrate deeper into the mythical landscape.

Let me reproduce another interesting example (in a completely different style) from the prose piece "Tarantula", where the action is relegated to a more or less drunken boat:

"Then the ropes are thrown away. We rattle our way out of the disastrous port quarter in this Caribbean idyll. Hallelujah, it's free beer, shouts the amateur psychologist, passenger no. 2. She was once a medical student and nude model, now a hacked-up protest train. Amigo Jesus, screams the deck boy from Nicaragua, on uneven roller skates along the row, and kisses the gamblers, the artists, the gays, wherever they happen to appear in the harbor bars. Could Hitler have said that, wonders the wheel-legged castrato, he is a telegraph operator, and holds the toothpick crosswise in his mouth for a second so that the shoe cracks. What? asks the repairman. The repairman needs to fix the captain's bathtub. He lies there floating in his little pool listening to Beethoven. The engineer is afraid he has contracted appendicitis. The telegraph operator sends a carrier pigeon from the top lantern. It seems that everyone has a turn. We look up at Karlsvogna and set the clock."

Despite the fact that this extract is only a single paragraph in a longer prose narrative, one may sense a distant blood connection with Arthur Rimbaud and his prose poetry, which hopefully shows a little more of the breadth of the cornucopia Voodoo Science.

At the very end, I would like to highlight an example from the great revelation poem towards the end of the book, "John's revelation":

Lord: Write gold from a glowing furnace.
Write seven stars and a double barreled shotgun.
Write the sun when it shines in its full power.
Earth loves blood.
The families of the earth cry.
Almighty brother, almighty sister, write in a book:
The seven living beings shine prophetically.
Fear not.
Write as foreign workers,
Write as the mouth writes the feet.
The secret of Hades, prophetic Jesus.

This entire poem continues over 22 stanzas of varying (preferably increasing) length and offers several visions of a different order, so to speak.

Readable from all sides

Terje Dragseth has so far published 24 books and is one of our great poets. He has written several books that can be read several times with increasing benefit. Like, for example, the poetry collection I write the language or the proselyrical short prose collection The sun sighs in my shoes. Not to mention the small collection of poems I think like a girl taking off her dress, which sort of sets the tone for all of Dragseth's fascinating writing.

Om Voodoo Science holds the same level, it cannot be up to a single man to judge, since this work of poetry, according to the publisher himself, is about a new form of literature. Should I issue a warning to the reader at the end, it would have to be against reading too large parts of the book consecutively. You then run the risk of a wild language machine starting up in your head, so that you start writing books yourself.

It must be doubly emphasized that this book will be difficult to access for inexperienced readers. Some of the short poems that you come across here and there can seem more or less bland – even to a reasonably trained reader, at least at first and second glance. The very short format, which is almost down to haiku level, in my opinion requires a little more from the author than what Dragseth has managed to provide in some places, so that the poems really appear as living particles of God.

Having said this, it must be added that the book is a full 264 pages. The reader is able to cope well with the flaws and beauty spots that are found in between. The book is to be regarded as a 7-course dinner served at a slow-food restaurant, i.e. 7 advanced books in one. It can be advantageously read from all sides, i.e. non-linearly. For example, you can start with the dessert, the last poem in the book, which, like the foreword, is signed by Terje Dragseth himself.

The limits of our way of life

The Chinese dream: "Our time has come."

Anti-Gypsyism is the latest yet widespread form of racism, directed at the Roma. Maria Rosvoll's Zolo Karoli is a feat of a book.

The experience of (un) human encounters with the ancients

NURSING: After a decade in Norwegian elderly care, nurse Vigdis J. Reisæter could no longer bear to give a sedative to anxiety sufferers of dementia instead of a hand to hold and an ear to listen with.

DEMOCRACY: Anne Applebaum shows how concrete historical events developed a political populism. How can we understand and counteract the forces that want the liberal, democratic, fact-based structure of society to come to life?

What shaped him as a human being

MEMORY: Was the most interesting thing in Thorbjørn Jagland's book overlooked by the critics?