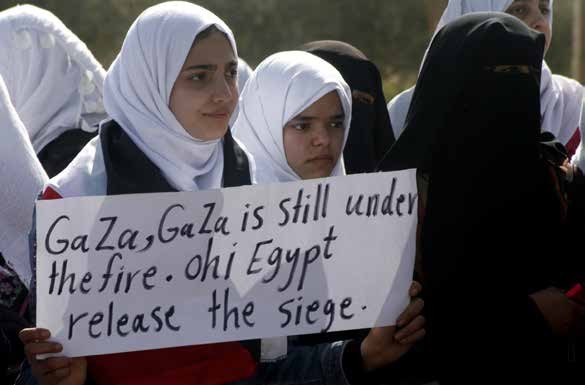 Review written by Nadia Othman
Facebook
Telegram
Twitter
WhatsApp
Email
Print
3 November 2019
GAZA / Can the proposed US solution of land redistribution and an expansion of the Gaza Strip end the conflict in the Middle East?

On the other side of Gaza's border in the southwest, an Egyptian military action in Sinai against IS and militant salafists is underway. Egyptians are trying to stave off arms smuggling into Gaza. At the same time, there are proposals to expand the Gaza Strip to the Egyptian Peninsula, to settle millions of Gaza's population in the Egyptian Peninsula and to launch economic projects – in line with the regional changes proposed by the Americans to end the Middle East conflict.

Adnan Abu Amer, who heads the Department of Political Science and Media Studies at the Umma University of Gaza, remembers well the document that Israel's former security adviser Giora Eiland wrote early in 2010. The comprehensive, detailed document contains a proposal in which Americans wanted Arab countries to give up some land to improve relations with Israel.

The only Arab country to have, and which Israel and Palestine so badly need, is land. If these countries gave up smaller areas, it would be beneficial for all parties. An exchange of territories is based on the premise that Egypt must surrender 720 square kilometers of the Sinai Peninsula to a future Palestinian state. In return, Egypt will get the southern Negev, which was Israel-occupied territory in 1948.

According to this plan, the Palestinian people can settle in the Sinai areas that will be annexed to the Gaza Strip, and they would have the opportunity to build a port and an international airport. Jordan will benefit from the project through the Gaza port against the Mediterranean, with transit for imported European goods and exports to the Gulf and Iraq. Jordan will also be allowed to repatriate 70 refugees to the "expanded strip". Israel, in turn, will annex all settlements in the West Bank and anything that falls within the separation wall.

The only Arab country has, and which Israel and Palestine so badly need, is
lands.

According to Abu Amer, such a solution would be a gift package for Israel. The Israelis can withdraw from their responsibilities in Gaza, and the Palestinians will have a carrot that keeps them in check, since they will be concerned about their own development.

At the moment, Egypt and Hamas are handling the crisis in Gaza without any migration towards Cairo or Tel Aviv, Abu Amer told Ny Tid. An eternal division is a goal for Israel if the dream of annexing Gaza to Egypt is realized.

In this context, it should be mentioned that in 2012 and 2015 the UN warned that conditions in Gaza were so severe that the area would be uninhabitable by 2020. There are only a few more months. However, political analyst Talal Okal dismisses the prediction: "Gaza may prove to be in spite of its limited resources, but the calculated depletion tactics of Israel and Egypt could fulfill UN prophecies."

On the way to the eastern border separating Gaza and Israel, protests continue after 72 weeks. We meet Aisha Abu Rahma (31), one of thousands of protesters. She holds a small plastic bag filled with stone that she hands out to the protesters, who throws the stones at the Israeli soldiers hidden on the other side of the fence.

Hairdresser Aisha is unsure how long the demonstrations will last: “A concrete scenario is unpredictable in Gaza. Gaza is like mercury. Every day there is an unexpected scenario that can overturn any expected scenarios. ”

The protests began on March 30, 2018, with a demand for Palestinian refugees to return home, and a call for an end to the 13-year Israeli blockade.

Talal Okal supports the women protesters' view: "Israeli support for Hamas could be resumed, Trump's plan could be implemented, and Gaza will be allocated billions of dollars in donor support. The UN's prophecy can be turned into a mirror image in which Gaza is part of a new state, a new Palestine with a new elected government, in which Hamas must hand over all weapons to the Egyptian authorities, and all borders are reopened for trade – which appears to be be the purpose of the siege and the war against Gaza.

Hamas is part of this planned scenario. Keeping the Islamic movement under siege with the help of Qatar does not help Gaza. Increasing the intensity of the confrontations in the weekly protests can lead to a devastating war, and Hamas does not want it; they want better living conditions in Gaza and have no other options – they are waiting for fundamental changes. But Hamas will not relinquish control of Gaza. They appear to be trying to maneuver with both Israel and the Palestinian Authority while buying time in anticipation of major changes in the region.

Asmaa Yonus' (52) youngest son wants to emigrate to Belgium, and she is unable to persuade him to stay. She is desperate, convinced that she will never see her three sons again. Engineer Raouf managed to escape to Sweden, Tawfeeq has migrated to Turkey. Now the youngest man Nezar (28) is waiting for his turn to cross the border into Egypt. "The last few years have been tough, and I have changed my mind that Gaza will be able to offer young people a future. The whole family is frustrated at how bad daily life has become ", says Nezar to Ny Tid. "Young people in Gaza are growing up under siege, military escalation and poverty and are just standing by the fence to protest. We can no longer bear it, what is the future of it? " he asks. The brothers are no exception. According to a survey conducted by the Palestinian Center for Policy and Survey Research, 50 percent of adults in Gaza emigrate for political, economic or security reasons. Gaza is struggling with rising unemployment – the highest in the world – and more than two-thirds of the population live in poverty. One can leave Gaza in two ways: either via Erez and into Israel, which requires a permit that is difficult to obtain, and which is given to those who fit into categories defined by the Israelis – such as approved businessmen or seriously ill, or via Rafah and into Egypt. Rafah is the only option for the majority of Palestinians living in Gaza.

Nadia Othman
Othman is a regular correspondent for Ny Tid, living in Gaza.

The limits of our way of life

The Chinese dream: "Our time has come."

They play with kites, with snow, with a green brush, with broken pieces of mirror or a piñata

PLAY: The exhibition by Francis Alÿs at Copenhagen Contemporary neither explains nor defines what play means. Rather, it is an archive of toys and forms lines of connection between people across the places we come from.

ABUSE: Three men in their forties informed their former school, the Jesuit Canisius College in Berlin, about how two priests had sexually abused them decades ago. This led to countless disclosures – not only of the abuse itself, but of the church's consistent secrecy.

All violations of international law

A typical day in Sheikh Jarrah

JERUSALEM: I'm hit by a bucket of water, an apple, a rock. A glass bottle. A man turns the stereo fully on in my ear. I'm moving. I'm trying to write. A boy comes running and steals my pen. "Do you want coffee?" asks a man kindly. He throws me a cup.