The war – and most people

Written by Truls Lie
8. June 2022
Facebook
Telegram
Twitter
WhatsApp
Email
Print
In this summer issue, as MODERN TIMES's editor, I publish a selection of articles that probably reflect different opinions than most people have about the war in Ukraine.

This article was translated by Google and R.E.

Let me get back to «most people» eventually.
My skepticism about the current attitude often stems from that the NATO membership as Jens Stoltenberg (see poems about him) promoted for Ukraine, was hardly realised. All member states must vote in favour, as relaxtion Russia for some is more important than giving Ukraine membership. So what was the real reason for the invasion and war that is now raging? Is the Russian-speaking areas of the Donbas and Crimea really so crucial for Ukraine and the world that we will all risk a third world war? Is this not also a proxy war between the United States and Russia – as the United States has stated that Russia should be weakened as a state? But let it be said once and for all: MODERN TIMES does not support at all Putin's invasion of Ukraine, the use of military force as a «solution» or the exercise of dictatorial and oligarchic economic power that Russia's totalitarian leadership represents.

I publish here – probably to the annoyance of many – Ola Tunander's article, which addresses how NATO / USA triggered the invasion, and his essay on the dangerous US-backed biological laboratories in Ukraine. Furthermore Marielle Leraand who criticizes Volodymyr Zelensky as a Hollywood dream of a man. And John Y. Jones who describes Nazis in Ukraine in the appendix on anti-Semitism. Otherwise, you will find how Putin is influenced by Russian thinkers like Ivan Ilyin og Aleksandr Dugin. And Putin as a «spin dictator». Dag Herbjørnsrud shows, with Ukraine as a backdrop, the war on our understanding of reality. And in Modern Times Review, we also review a number of documentaries about war, on both Russia and Ukraine (for example Navalny og Mariupol 2).

I also wrote about today's increasing technological militarisation in the previous MODERN TIMES, under the heading «The warlike mindset». The leader was read by close to 5000 people in print and online.

But one may ask whether all these mentioned articles really help against the increased violence, hatred and enmity Europe is now experiencing? Is it really possible to turn our attention to larger common tasks than this futile militarism – which annually has a price tag of 17 billion kroner? Is it possible to listen to arguments, long-term thinking and revealing analyzes, rather than polarized emotion-based rhetoric and propaganda – which teases, offends or frightens most people?

I Mass psychology and I analysis - the future of illusion (Vidarforlaget, 2022 [1921]), Sigmund Freud analyses, interestingly enough, «most people». Let me refer to Eivind Tjønneland's afterword, which deals with the masses / audience through the ages. Gustave Le Bons Mass psychology (1895) has been considered the originator of mass psychology, a starting point for Freud's book. Le Bon emphasized «that the mass must be led: without a leader, the mass lacks coherence and power." Well, Zelenskyj plays this role with brilliance. Tjønneland quotes Le Bon: "Without scruples he must be able to promise the masses the fantastic.» But will we in a few years, when this war is over, as in Afghanistan, see how pointless it all became – without anyone really winning and losing?

"Without scruples, he must be able to promise the masses the wonderful."

Freud's book also suggests: «Those who do not join the herd will be wiped out through natural selection. Wolves that do not follow the herd will starve, while sheep that break with the herd will be eaten». Tjønneland also refers to Martin Conway's book The Crowd in Peace and War (1915): «Military strength depends on the individual giving up his freedom and participating in an organic whole.» Freud also relied on the psychologist William McDougall, who described panic as «a collective intensification of instinctive arousal, feeling of fear and escape impulse», as Tjønneland writes.

So how illusory or not is the «civilised»? The barbarism quickly turns into war: As I was told by the daughter of a woman hiding in her basement in Bucha, Ukrainians (Azov?) got drunk and shot at civilians – before the Chechens and Russians arrived and were equally barbaric. And since 2014, the fighting in the Donbas, where 14 died, how long was it going to last? It is not only Russians who kill civilian Ukrainians (and prisoners of war). When the West now comes up with weapons, this barbarism without diplomacy will only increase.

When I was in Kyiv in 2014, the democratic will was great among those I filmed. The he author Andrej Kurkov also stated recently, said that Ukrainians have historically been fundamentally free and anarchist, while the Russians have always been «obedient» citizens . Russia would never have been able to «occupy» or control Ukraine, so why did NATO have to get involved?

As early as 1928, Freud's nephew Edward Bernays used World War I to understand the effects of propaganda. As Tjønneland points out: «The manipulators of patriotic opinion formation produced mass reactions against the enemy. Similar methods were then used in peacetime. The elite, the intelligent , the minorities, according to Bernays, had to use propaganda to organise and carry out his will.»

Chris Hedges (see also two articles of him in the Annex), such minorities refer to in the article «The Pimps of War»(Transnational.live, 28.4.):« The same cabal of warmongering pundits, foreign policy specialists, and government officials, year after year, debacle after debacle, smugly dodge responsibility for the military fiascos they orchestrate… the authors of the policy to invade Afghanistan, Iraq, Syria, and Libya.» Hedges mentions, in particular, that Robert Kagan, who works with Joe Biden, propagated for the military regimes in El Salvador and Guatemala, as well as NATO's expansion in Central and Eastern Europe. His wife Victoria Nuland (she is also mentioned in the appendix) worked for Biden with Ukraine in removing President Yanukovych.

The second son of right-wing ideologue Donald Kagan, Fred Kagan, pushed for a war with Iran. This aforementioned «minority» of moral and intellectual trolls also includes Kimberly Kagan, Fred's wife, who in 2007 established The Institute for the Study of War. Inflated images of enemies and the spread of fear contribute to the fact that most people welcome militarisation: the United States recently adopted several hundred billion kroner for weapons for Ukraine. The USA (/ NATO) contributes to threatening Russia where they «drag» Finland and Sweden into the USA / NATO «attack alliance», and now places US bases in Norway (see also page 62, and The Rawness of Silence , page 63).

Does anyone really think that Russia should invade Sweden? And in a cohesive European Union, Ursula von der Leyen is unilaterally concerned about Ukraine – she wants heavy weapons sent to Ukraine, and prepares us for the war to last for years. Germany follows. And not only politicians, but also a number of commentators in Norwegian newspapers – who themselves have never experienced the hell of war – are cheering that, with more weapons, Ukraine will «win» over Russia.

The consequence of a long struggle against the superiority of Russia is that hundreds of thousands of Russians and Ukrainians die in a meaningless battle. But just as wrong is the consequence of Ukrainian grain warehouses lying and rotting in Odessa, where far more people will now die of starvation. And the consequences of economic regression?

When the West now comes up with weapons, this barbarism without diplomacy will only increase.

Without conciliatory diplomacy with surrendered territories, we will all now risk that this dangerous Russian bear feels pushed into a corner, and eventually fires a nuclear missile, with a subsequent escalation no longer possible to stop. In the worst case, three billion people could die…

Several have tried to stop this madness: Henry Kissinger asks Ukraine to surrender Donbas and Crimea; Recep Tayyip Erdoğan has tried to mediate; Emmanuel Macron tried. Jonas Gahr Støre, as a neighbor, has at least shown some moderation, but can then be led into what most people want. 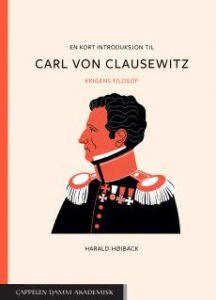 I A brief introduction to Carl von Clausewitz. Philosopher of war (Cappelen Damm, 2022) Harald Høiback refers to Clausewitz who found little strategy in war, where «war is a continuation of politics by other means». Høiback, for example, refers to Bob Woodward's interview with President Obama in 2011, who replies: now ten years on – «It took ten years, so what really drove them? The United States has been at war for a couple of hundred years».

The militarisation most people will now experience more of is thoughtless. Maybe a death drive à la Freud?

All violations of international law

FILM FROM THE SOUTH: