The war in Libya was not the result of an intelligence feud. Humanitarian rhetoric was prepared weeks or months in advance to justify a military intervention.
(PS. This article is machine-translated from Norwegian)

In February and March 2011, the mass media claimed that Libya's leader Muammar al-Gaddafi killed civilians and that a genocide had already begun. Reuters and Al Jazeera reported that Gaddafi's air force bombed civilians "every 20. Minute ", and the rebel leaders said that his African mercenaries had" unrestricted authority for looting and killing of civilians ". News agencies and political leaders in the US, France and the UK reported an upcoming massacre in Benghazi – "a new Rwanda". Today we know that all this was a lie, and that the US intelligence services were aware that it was a lie. Defense Secretary Robert Gates even resigned because he did not want to join Hillary Clinton's war.

Peculiar alliances. When the first anti-Gaddafi demonstrations took place in Libya, Western special forces were already in place in Benghazi. One month after the US, Britain and France launched the bombing campaign, a third of Libya's defense was knocked out. However, NATO's air war would not have succeeded in taking out the Libyan resistance without a ground war driven by thousands of Qatari special forces and other Arab countries fighting alongside Libyan Islamists with war experience from Al Qaeda in Iraq and Afghanistan. According to the British chief of defense, Qatars and Emirates participation in the war made it a success.

According to an email to Clinton, uprisings in Libya could trigger similar in Syria – this could open up for war against Iran.

How the United States used Islamist Arabs that later joined Al Qaeda in the Afghanistan war of 1979, Libya war strategists also used Qatari special forces and Islamist groups affiliated with Al Qaeda – the latter because they were the only Libyans with war experience willing to fight against the Gaddafi regime . As Gaddafi's Justice Minister, Mustafa Abdel Jalil "opened" Libyan prisons and released hundreds of Islamists in 2009-2010. These became Jalil's ground forces when he started the rebellion against Gaddafi. According to US confidential documents published by Wikileaks, Jalil cooperated with the Americans from 2009. They knew from the beginning that he was a conservative Islamist.

Ethnic cleansing. In 2011, mass media talked about a "people's war against a dictator," but the Western intervention was essentially support for a party in a tribal conflict. The war led to an ethnic cleansing of black Africans who supported Gaddafi – racism has been well known in Libya since the slave era in the 19th century. About one-fifth of Libya's population was black Africans, and many hundreds of thousands of black immigrants worked in the oil industry to earn enough to pay human traffickers for the journey across the Mediterranean to Italy. In 2008, Libya signed an agreement with Italy to stop human trafficking. The illegal business was made more difficult, human traffickers lost a fortune, and an increasing number of black immigrants became a problem in coastal cities. The rebellion against Gaddafi started with the killing of black Africans. Racist Libyan rebels emptied the city of Tawergha for its entire black population.

The war in Libya led to an ethnic cleansing of black Africans who supported Gaddafi.

Resources and influence. Libya has close to 40 percent of the African oil reserves, and Americans were concerned about Gaddafi's "nationalism" of resources and influence over the African Union. Since the 1970s, the Americans, British and French had made several attempts to kill Gaddafi. The French arguments for the war in 2011 – as presented to US Secretary of State Hillary Clinton – were to secure French access to Libyan oil and stop Gaddafi's plans for a new African currency, which would weaken France's influence in Africa. Military power was also considered popular in France, and a French war could strengthen the chances of President Sarkozy's re-election. Killing Libyan civilians was not among the arguments for going to war. Rather, it was a question of the very traditional interest of the colonial powers in influencing the African continent.

According to an email from Clinton from her intelligence contact Sidney Blumenthal, a rebellion in Libya – backed by Arab ground forces and Western bombers – with subsequent regime change could be what was needed to trigger a rebellion in Syria, which could similarly trap it Syrian regime. It would again open for a war against Iran, which was the ultimate goal.

Disastrous consequences. Six years after the war, we know that the Western operation has destroyed the Libyan state and replaced it with a country characterized by tribal war, Islamist rivalry and competing governments without real influence. From being a stable, authoritarian and relatively rich state, Libya is now characterized by poverty and insecurity, racial violence and human trafficking. Total lawlessness has enabled slave trade in several parts of the country – Africans are now sold as slaves in open markets for NOK 4000 per piece.

Immediately after the victory in Tripoli, the same Islamists began to carry forces and weapons to Syria.

In 2010, Libya was ranked number 53 on the UN Index for Human Development – highest in Africa and higher than some European countries such as Albania, Bulgaria and Serbia. Libya was a welfare state with free health care, education and electricity, and provided state support to all marriages. In 2015, the country was ranked 102 – after Jordan, Algeria and Mongolia.

In addition, about 10000 portable Libyan anti-aircraft missiles – capable of shooting down planes – are spread among Islamist terrorists across North Africa and West Asia. The war in Mali and the mass immigration to Europe were a direct result of the Libya war. In 2012, the UN reported that more than 10 percent of the population – primarily black Africans – had fled Libya.

Today we can state that the intervention in Libya was a disaster. This has been thoroughly documented by international organizations, news media and authorities in several countries.

In 2016 came the investigation report on the Libya war prepared by the British House of Commons Foreign Affairs Committee. The report described the intervention as follows: "The result was political and economic collapse, war between militias and tribes, a humanitarian crisis and a refugee crisis, extensive human rights violations, proliferation of Gaddafi regime weapons throughout the region and the rise of ISIL in North Africa. "The Foreign Affairs Committee found no evidence that Gaddafi's regime posed a" threat to civilians ".

Tunander is up to date with the book
The Libya War: The Use of Rhetoric and Deception to Destroy a State (Circle publisher).

PRIO: Many who question the legitimacy of the US wars seem to be pressured by research and media institutions. An example here is the Institute for Peace Research (PRIO), which has had researchers who have historically been critical of any war of aggression – who have hardly belonged to the close friends of nuclear weapons.
COMMENT

SAHEL IN ENGLISH: France has strangely managed to preserve the hegemony over its former colonies, including in the dissemination of knowledge. This book is a much needed exception, which provides the background for understanding the recent coup in Mali. 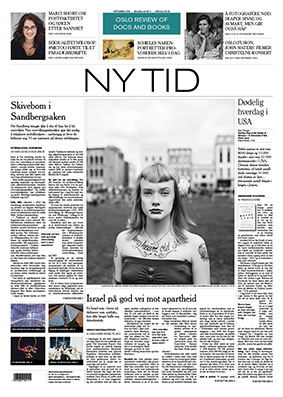 Try the first month for free!

What does the Center Party, the Red Party and the Green Party really want to change?

What ethical principles are behind the first vaccine sticks?

SEPTEMBER 11: The power of 20 years of propaganda
SEPTEMBER 11: NYC EPICENTERS 911-> 2021½ (by Spike Lee)
DEATH: An excommunication of the dead and death?
PHOTO: What I'm talking about when I talk about pictures
RACE THEORY: African American Political Thought; A Collected History,… (by Melvin L. Rogers,…)
ANARCHISM: William S. Burroughs. From cut-ups to shotgun paintings (by Lars Movin)
DOCUMENTARY: SEVEN (by Dylan Avery)
ENVIRONMENT: The politics of hope (by Bjarke Møller)

ESSAY: I was completely out of the world
PRIO: Silently disciplining research
SPAIN: Is Spain a terrorist state?
COVID-19: Vaccine coercion in the shadow of the corona crisis (by Trond Skaftnesmo)
MILITARY: The military commanders wanted to annihilate the Soviet Union and China, but Kennedy stood in the way
BJØRNEBOE: homesickness
Y-Block: Arrested and put on smooth cell for Y block
ROD: A forgiven, refined and anointed basket boy
Environment: Planet of The Humans (by Jeff Gibbs)
MIKE DAVIS: The pandemic will create a new world order
cohesion: Newtopia (by Audun Amundsen)
ANOREX: self Portrait (by Margreth Olin,…)