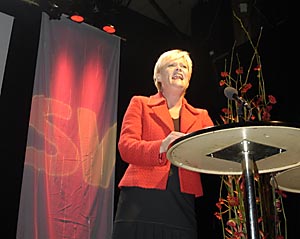 Review written by MODERN TIMES
Facebook
Telegram
Twitter
WhatsApp
Email
Print
27 September 2005
The virgin state is over, SV. Now we must be able to stand for what we say.

(THIS ARTICLE IS ONLY MACHINE TRANSLATED by Google from Norwegian)

SV's biggest problem during the election campaign arose when parts of the party's politics had been moved from the dim light in the national assembly hall in Kristiansand to under the critical light of the public. Parts of politics simply could not stand the new light. Thus, in contrast to the other party leaders, Kristin Halvorsen had to try to defend issues and formulations that could hardly be defended. That is what should worry the party leadership in SV. In addition, SV lost many votes on the party leadership behaving loyally towards the new alliance partners. – But sacrificing self-marking out of consideration for the loyalty of the red-green partners was perhaps still a right choice that can pay off in the long run.

In an almost self-effacing critical review of her own efforts during the election campaign, Kristin Halvorsen told SV's national board last weekend that all significant election campaign initiatives she was behind,. . .