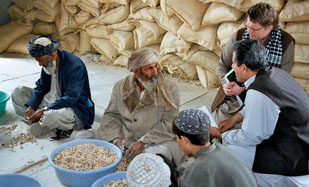 Review written by MODERN TIMES
Facebook
Telegram
Twitter
WhatsApp
Email
Print
27. July 2007
23. July a Norwegian special soldier was killed in Afghanistan. There is a strong connection between what is happening in Afghanistan and Pakistan, explains scientist and Afghanistan expert Arne Strand, who thinks a military solution will not work.

A Norwegian special soldier is among well over a hundred foreign soldiers killed in Afghanistan so far this year. Still new reports of kidnappings and suicide bombers come from the war-ravaged country. At the same time, it has exploded in neighboring countries following the storming of the Red Mosque in Islamabad. During the first three weeks of July, 285 people were killed in suicide attacks in Pakistan. What is happening in the two countries?

- In both places, the fight against the United States and its supporters is spreading to new areas. The Swat Valley in northern Pakistan, for example, has previously. . .

SOCIAL ANTHROPOLOGIST: With topics such as forced marriage, child marriage, rape and honor killings, Professor Unni Wikan has studied people all her life, but not least – the Muslim. She has had to avoid that.

"I failed to stop the Iraq war"

THE UN SECURITY COUNCIL: Katharine Gun leaked information about the NSA's request to the British intelligence service GCHQ to spy on members of the UN Security Council in connection with the planned invasion of Iraq.

PRIORITIES: Many who question the legitimacy of the US wars seem to be pressured by research and media institutions. An example here is the Institute for Peace Research (PRIO), which has had researchers who have historically been critical of any war of aggression – who have hardly belonged to the close friends of nuclear weapons.

The war reporter close to the truth

PORTRAIT FILM: War Reporter Robert Fisk has the courage to monitor and challenge. He is known for reporting from the front lines in violation of the official line of politicians and authorities.